I’m a writer, printer, self-publisher, research artist and project curator. Since 2015 I‘ve been curating projects and spaces working mainly in the field of independent writing and self-publishing. Projects include: Strange Perfume ‘A Queer publishing Fair’ at the South London Gallery in 2018 and 2019 and at Chetham's Library, Manchester in partnership with Book Works ‘You Must Locate A Fantasy’ Library Residency Scheme (2018). Assembly on book fairs London Art Book Fair, Whitechapel Gallery (2018).

My writing has evolved into a style that is attentively inspired

in part by Derek Jarman’s diaristic script writing combined with my own ‘queering the reality’ a technique that incorporates historical LGBTQ+ liminal events set within kaleidoscopic narratives. My latest writing project ‘I Am a Not Gay’ and its narrative is played out against the backdrop of a metaphoric domain of the Blue Mountains a hypnotic landscape from Jarman’s film, Blue (1993). Through fairy-tale characters and mischievous narratives,

a series of topsy-turvy scenarios.

My past writing projects include my pseudonym ‘Sally Fairbrass’; Sally’s writing focuses on the zeitgeist and social ideologies of the 90’s drug-induced cultures​ in a​ period of bias media coverage

of the queer identity. 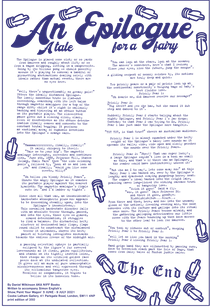 Rita! I Am a Not Gay addresses the bias heteronor­mative obstacles of language and confronts what is the ideal-real for the queer identity through a series of topsy-turvy scenarios.

A tale for a fairy

A text to accompany Simon English's Paint Your Wagon,